From 2009-11 Heather co-founded New Research Trajectories (NRT) network for PGR students to create opportunities to discuss and explore the potential of practice based research.

New Research Trajectories is a post graduate led project developed collaboratively with Andy Coverdale and Rachel Walls from University of Nottingham, and is funded by the AHRC as part of their Beyond Text Programme.

The aim of the network was to explore alternative ways to disseminate research – going beyond the traditional route of the conference paper or publication.

The network  organised three day long events of activities one at Nottingham Contemporary another at Loughborough University and a third at venues in Nottingham City Centre as part of Sideshow the Nottingham British Art Show 7 Fringe Festival.

The events were developed by the participants and have included talks by Rachel Jacobs from Active Ingredient, and PhD candidate in Ubiquitous Computing at the Horizon Doctorate Centre at the University of Nottingham and Nils Norman, artist and Head of Department at Royal Danish Academies of the Visual Arts, Copenhagen, Denmark .  The Loughborough event included a coach, field trip to Beacon Hill to encourage participant to consider travelling, walking and informal processes as part of their methodologies.

This days event was the culmination of discussions, ideas, and collaborations that had formed and taken place during the previous meetings.

We started out in the Space at Nottingham Contemporary for an introduction and outline of the days event and a brief outline of Jackie Calderwood’s – Creative Conversations a subjective activity for participants to engage in throughout the day. 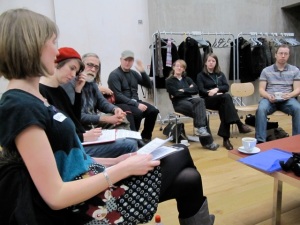 We then headed off on foot to the Park Tunnel for Transversation two experimental performances by Heather Connelly and Zalfa Feghali. 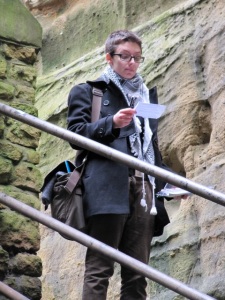 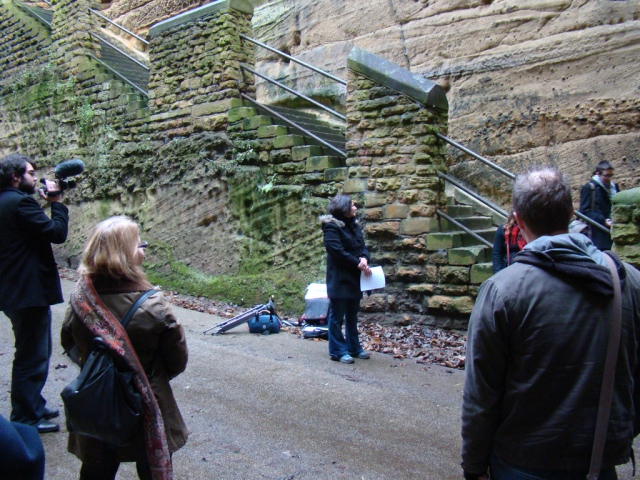 As the participants  gathered in the central area of the tunnel,  Zalfa began to speaking in Arabic as she began to descend the staircase (which punctuates the tunnel).  Whilst Heather repeated what she heard as best she could, attempting to convey the information to the audience.  The orated Text was an edited compilation of Italo Calvino’s ‘Invisible Cities’, which was modified and mediated by Connelly and Feghali specifically for this performance.

The second piece involved Connelly and Feghali playing with the echoic properties of the tunnel.  They took it in turns to enunciate words and properties associated with translating – they are spoken in English, Arabic, Greek and French.  Attempting to communicate with each other or at least reach some sort of understanding as they traversed from one end of the tunnel to the other.  The physical space between them has the potential to draw attention to this seemingly invisible process.

A lively discussion about ideas, references and observations ensued – which revealed various ideas, outcomes and associations that evolved from the relationship with the site, performing outdoors and the acoustic nature of the space, that we had not anticipated or expected, when the work was developed.  The discussion illustrated the value of ‘practice’ based dissemination and research as these ideas/conversations etc would not/could not have happened if the work had been seen elsewhere or in documentary form.

We stayed longer in the Tunnel to participate in Jackie Calderwood’s Creative Conversations which involved us ‘exploring questions about our individual research journey, forms of communication and the nature of dissemination. The activity encouraged participants to reflect on and express their research interests in a non-verbal form, using a simple 16-square grid and coloured pens or crayons and invited us to engage with ‘Clean Language’ technique originated by New Zealand psychotherapist David Grove.  A method that she discussed with us in depth after we had completed the exercise. 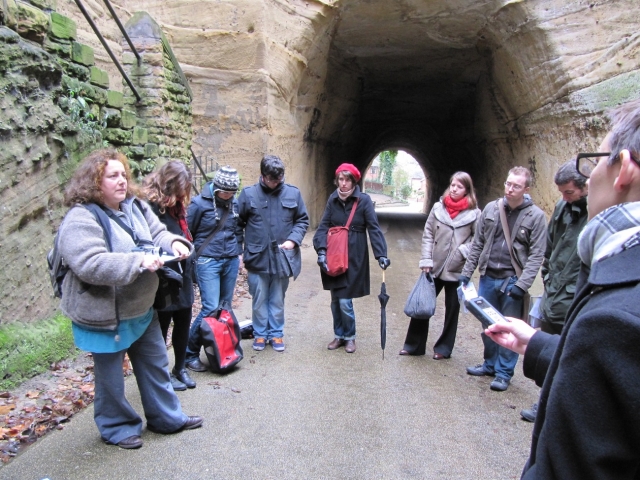 We then headed back into town, into Market Square, where the ice rink and christmas market was in full swing.  Where Nicola Donovan was occupying the ‘nativity’ hut next to the left hand lion directly in front of the Town Hall, adjacent to the merry-go-round. 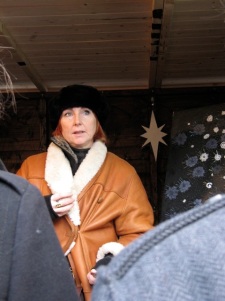 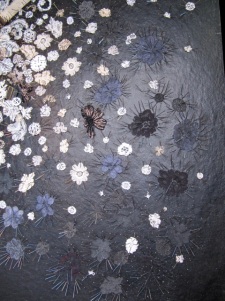 Lace Point functioned as a temporary studio where passersby where invited to share their thoughts, memories and knowledge about Nottingham Lace and it’s industry by interacting with Nicola and her art work.

We then headed to Nottingham Arts Theatre for lunch, informal discussion and the afternoons activities.

Michael Pinchbeck and Becci Gamble introduced their projects that took us backstage, and allowed us to investigate behind the scenes, those areas that are not usually open or visible to the audience.  This mirrored the aim of NRT initiative, by focusing upon practice, process and the mechanisms that are necessary in order to present research or a performance etc.

Michael Pinchbeck restaged And the curtain falls where individual members of the audience where invited to don headphones and listen to stage directions and memories of various amateur dramatics stagehands. 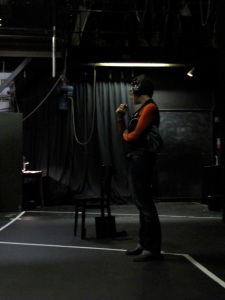 Becci Gamble invited the participants to play the role of host, guest or stranger taking participants on a tour around the building and into a dressing room below.  She did away with most of her usual props, stripping her practice down to its bare essentials in order to try to elicit responses that would enable her to understand the key elements in her practice/research further. 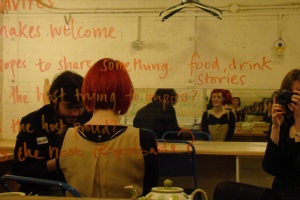 Lee Campbell joined, contextualising his research by reading a ‘traditional paper’ on the stage, curtains drawn which contrasted dramatically with the collaborative practice that followed.  Like Michael, Lee decided to re-visit an earlier work and was suprised at the ‘different results’, he invited five participant s upon stage, provide brief instructions and proceeded to read out very simple commands for them to follow, react to etc.  It was a very physical activity and it was interesting to watch how the individuals reacted to what was asked of them.

We left the theatre to discuss the days events over a pint at the Bunkers Hill Tavern…downstairs in the bar there was tie for informal chatting and continuing conversation before we headed upstairs for a more structured discussion about what had happened throughout the day – and what could be argued the most formal part of the day!

And finally for those who wanted to stay on we headed to Lab at the Surface Gallery for a talk by David Bell about Critical Pedagogy – Art, Education and the Social Organism.

This was an excellent end to the day, as it provided a critical frame for the days events and context for New Research Trajectories, referencing artists, politics, culture and educational models – it also brought to mind Nils Norman’s presentation and practice (from Loughborough Event). 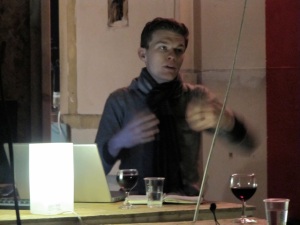 Further documentation and information is available at: http://heatherconnelly.co.uk/pages/New%20Research%20Trajectories.html